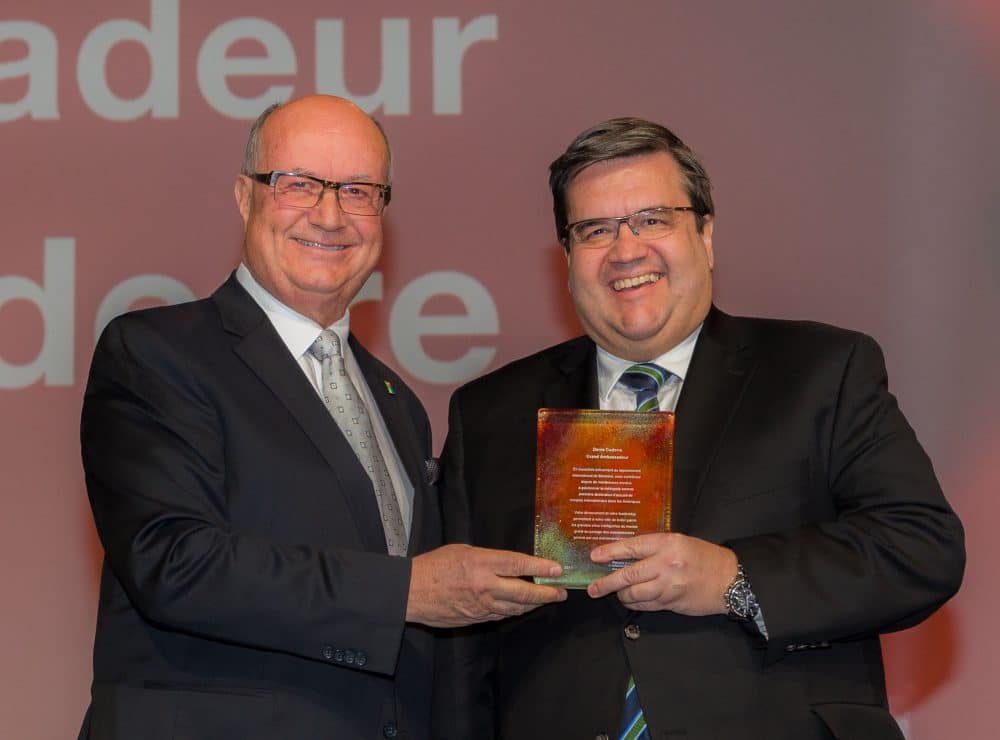 The Palais des congrès de Montréal presented an Ambassador Achievement Award and welcomed new members to its Ambassadors Club, during its Recognition Award Gala, which salutes the exceptional contribution of influential and dynamic individuals from Montréal’s various segments of excellence who step outside of their usual professions to actively bring international conventions to the city. Held under the theme of Montréal’s 375th anniversary, the event was attended by nearly 450 of the city’s decision-makers.

New Ambassadors join the Club
With Julie Boulet, Québec Minister of Tourism and Minister responsible for the Mauricie region, in attendance, leaders were honoured during the ceremony and named Ambassadors for playing an active role in bringing major international conventions to Montréal that will generate major economic spinoffs for the city’s and province’s economy, thanks to the 18,000+ business tourists they will attract. “It is with great pride that I salute your commitment to your field of work to make this province a prized destination for business tourists from Québec, Canada, and the world over,” said Minister Boulet. “We are pleased to celebrate these new Ambassadors for their contribution to making Montréal the top host city in the Americas for international events for a fifth straight year. Because of their determination and involvement, these decision-makers will make it possible to generate significant benefits essential to advancing science and building knowledge,” added Raymond Larivée, President and CEO of the Palais des congrès.

Dr. Pavel Hamet, President of the Ambassadors Club, also addressed the newly minted Ambassadors: “You will feel immense pride in hosting your peers from all over the world. Your meetings will spark invaluable intellectual benefits that will enable Montréal to preserve its title as a major knowledge hub.”

Recipient of the Ambassador Achievement Award
In addition to being inducted as an Emeritus Ambassador for bringing a second international convention to Montréal, Denis Coderre was also presented with the Ambassador Achievement Award for the dedication and leadership he has demonstrated throughout his career, and for his commitment to Montréal. An ardent defender of the city’s interests, and recognized worldwide as a dynamic and determined individual, Denis Coderre contributes to the city’s success and to its reputation among the world’s major tourism destinations. The brainchild behind the city’s Office of International Relations and involved in numerous organizations, including the Strong Cities Network and Metropolis, he helps Montréal shine on the world stage. Throughout 2017, Mr. Coderre continues to show his deep love for Montréal by passionately contributing to the organization of celebrations surrounding the city’s 375th anniversary.

The gift of sustainability
Together with Société de développement social and Sky Cadeaux et fleurs, the Palais des congrès is proud to have given the table centrepieces a second life by donating the flowers to the residents of the Centre d’hébergement Manoir-de-l’Âge-d’Or. An original way to spread happiness while fostering the social aspect of the Palais’ longstanding sustainability plan!

For complete details on the event, go to congresmtl.com/gala.